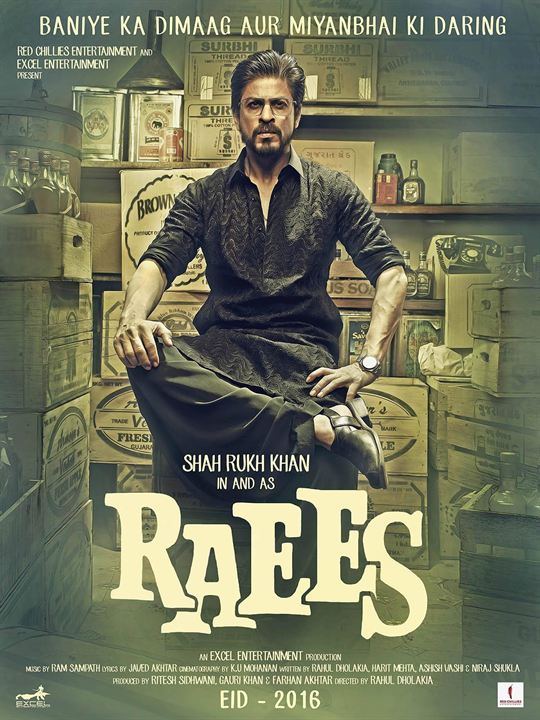 Extravagant and eventful, this vividly gripping crime thriller impressively captures the plot twists, business theories and police reality of the dry state of Gujarat, India in the 1990s. Even moving my finger during the movie was out of question, for I was on the edge of my seat the whole time. From costumes, to music, and dialogues to the police-chases on the illegal wine-selling drug lords, this movie pieces everything together in a flowing, intense way to do it all, that too, within two hours and 41 minutes. The fascinating part of this however, is that the Indian Film Actor, Shah Rukh Khan, the “King of Bollywood” who is normally seen taking on the role of the light-hearted romantic, is seen taking the part as the antagonist of the movie. Personally, this movie has made me think about many things to certain degrees, from deceit, hierarchy, religious status, betrayal, to communism, playing a role in friendship.

The genre of the movie, “Raees” is Crime/Thriller. The director of the movie is Rahul Dholakia and producer is Gauri Khan. The main characters of this movie are, IPS Majmudar, Raees, Asiya, Sadiq, Jairaj and Musa. Firstly Raees is the man of action, the crime lord, where IPS Majmudar is behind him to get him. And he is not simply some Police Head who would stopped by corruption after being shifted from place to place a number of times. He gets back at the people who he suspects no matter what, as he is of crooked characteristic, and this leads the audience on by questioning what will happen to the antagonists time and again.

A patriarchy is seen forming among the characters in the beginning scenes where Jairaj acts as the father of the company which Raees is a part of. This part of the movie is ironic wherein Jairaj mocks Raees on the start of his own drink business, given the topic of money, status and contacts. Later on in the movie, when IPS Majmudar captures a truckload of Jayaraj’s goods and is bulldozing it on the street to spread news about it, Jairaj seeks help from Raees who is now the owner of a smart, profitable alcohol business. Raees mocks the old man in the same manner that he was faced with once, which reminds the audience that the patriarchy has switched over to the ruling of Raees. Once more we see Raees’s character taking on a fatherly state when he goes out of his way to help four neighbourhoods full of Hindu and Muslim people, with food rations for over three weeks when the country is in a critical situation, where the country is left in danger of the RDX bombs.

Our perspective of the GENRE of a crime thriller film is formed by a certain concept where there is an protagonist to take down the antagonist. The perspective here is that there is a crime which is going on in the movie, and there is someone to stop it from happening. For this to take scene, the movie would be required to show rising action until the climax takes place from where everything returns to a slow pace where the downfall of the criminal takes place and their is either a happy resolution or as in most cases of this genre, a gloomy ending where the crime or the crime lord is diminished. As the government registers Raees’s land as green, he fails to continue construction, and he is left with little money in his hands. Taking an order from Musa, an underground don, he acquires enough money to return the loans of the people he was building for, little did he know, the illegal shipment of gold bars which Raees was ordered to deliver, had RDX bombs in them. The city was in grief due to the bombs, and Raees, being the man he is, Raees took the load of feeding the families of four colonies for three weeks as the crisis took action. Later, he found that the illegal shipment he had brought for Musa, had those bombs in them.

In an escapade, without running away, Raees finds himself stuck between a dark and light situation which has trapped him badly, wherein his family and closest friend, all are compromised. Going back to the slaughterhouse where he first met Musa, the underground don, to where he returns to finish them all. There is most dramatic irony when is “double-battery” looking glasses, were used as his murder weapon toward stabbing him in the front, instead of the way he was stabbed in the back. He visits the ever so symbolic grave of his mother and a flashback is depicted in the scenes before he leaves to surrender to the police who were awaiting him with rifles pointed at him with gunpoint. Knowing that if he had left, his loved ones would suffer. However, he takes press with him, which causes the police to lower their guns, rather than shoot Raees in the sight of his closest friend, Sadiq, his wife, Aasiya and his son. In a slow motion capture Raees gets one hearty hug with Sadiq and smiles at him saying “take care.” Even in the last moments, his dialogue is memorable, when he asks, “Will you be able to live, with the guilt of killing me?” and “Shoot from the front, I am not a backstabber.” This quote shows that Raees is actually a man who had done wrong in the sense of doing good for others, it infers to that he was framed by those who were close to him.

All in all, the piece is an amazing movie which grasps the audience as it can work with the irony and use dialogue as a factor to stun the audience with it’s captivating thriller scenes which do not fail to impress. The movie may seem old-fashioned for a film of this generation and this particular year in time, however it is truly authentic as to it’s real life context. In contrast to some movies, “Raees” is the story around a crime lord who was immensely feared by the people of Gujarat. Similarly the movie sets it’s audience up in the captivating hustling life of Gujarat, nonetheless the creators specifically denied, that, “The story of the film is a pure work of fiction, not based on any person; living or dead.” Personally, I prefer thrilling reality crime movies, as I can be engaged within the movie even after a solemn ending. The reality of this movie is that the story is about a person known as, Abdul Latif, who was a don from the 1980s in Gujarat, where the character of Raees portrayed him.