We all have experienced that groggy and lethargic feeling when we wake up as our alarm clock goes off in the morning. For some people, this may be rare, but for some others, this may sound like a regular morning to them.

You didn’t sleep much last night, so you get through the day in a zombie-like state, get easily irritable, have trouble concentrating, and the energy or motivation to actually be productive throughout the day just isn’t there. The minute you sit down in class, you slowly feel your mind shutting down. You desperately try to stay awake, but you can feel your eyelids getting heavier and your brain refuses to cooperate with you. The teacher’s lecture sound muffled and nothing goes into your head. Sounds familiar?

Instead of being busy with the teacher’s assigned work, you might be busy pretending to stay awake and trying hard to not get caught by the teacher. You hide your head behind your laptop screen, or get into a posture that makes you look like you’re awake but in reality, you’re dreaming away.

At the end of the day, you end up doing nothing productive because you’ve been fighting that constant fog over your head. Even if you weren’t dozing off in class, you’ve been rereading the same paragraph over and over, but you’ve retained nothing and you can’t fight the urge to skim-read. Sleep deprivation makes you unable to focus clearly, and you just feel like you couldn’t care less about anything because you don’t have the energy and you’re just tired.

Not getting enough sleep usually leads with brain fog and unfortunately, it’s much more common than you think – especially in teenagers. Brain fog causes you to be temporarily disoriented, causing mental cloudiness and concentration difficulties. On top of it, severe disinterest in the subjects you’re studying just worsens your academic performance. You’re completely aware of that essay due in a few hours and the deadline is constantly in the back of your head. You begin to feel the panic settling in. The deadline is looming over you, but no matter how hard you try to put your mind into doing anything productive – you can’t.

Most people need around 8-10 hours of sleep, but the generation of teens who are chronically sleep deprived make up 87% of U.S. high school students, according to a 2006 National Sleep Foundation poll. Teenagers live on so little sleep and unfortunately the amount of sleep they get decreases during high school. There are many reasons for this, but three main ones are academic pressure, technology use and biological reasons.

Excessive use of technology usually has something to do with teenagers who are prone to sleep deprivation. As the lights of the bedrooms are switched off, the screens of their tablets or phones remain on throughout the night. Instead of lying in bed and trying to sleep, they might stay on their phone, laptop or tablets until late at night. Smartphones are the last thing that most people (not only teenagers) look at before going to bed, and the light emitted from electronic devices disrupts the production of melatonin in the brain – a hormone which helps us wind down and fall asleep. It may trick your brain into thinking that it isn’t ready for sleep yet.

During adolescence, teenagers’ circadian rhythm (biological sleep clocks) gets pushed back by 1-2 hours because of the effects of puberty. While most adults start producing melatonin at 10 PM, teenagers don’t start producing melatonin until around 1 AM due to the effects of puberty on their hormonal processes. The lack of melatonin production means that teenagers may not find it easy to fall asleep as they feel awake later at night, which might also explain their need to stay up late with their phones under the sheets or watch TV shows until after midnight because they aren’t tired or sleepy enough to go to bed yet. Due to this, they may suffer from excessive tiredness during the day from lack of sleep.

When they get home from school, teenagers may choose to take a ‘nap’ that lasts for more than 3 hours and wake up feeling disoriented and decide to do other things instead of being productive. Procrastination is one of the biggest problems causing sleep deprivation in teenagers. They often get stuck in procrastination habits or lack of motivation/energy (which is a symptom of brain fog) and then choose to do their homework until it’s too late at night.

During school weeks, many teens try to catch up on weekends by sleeping in until noon. You get less than 8 hours of sleep during weekdays, and sleep for 10 hours straight during the weekends to make up for the lack of sleep. It may not seem harmful, but it actually pushes your biological inner clock further from the actual clock, shifting your body’s natural need for sleep to odd hours. You wake up at 7:00 AM but your body’s inner clock feels like 3:00 AM, you struggle to stay awake in class when it’s just 11:00 AM but your body may respond to the time like it’s 7:00 AM. Your circadian sleep rhythm becomes messed up as this sleeping pattern continues, and this affects not only your academic progress but also your emotional stability.

Sleep deprivation isn’t simply an issue in the classroom because it isn’t just a matter of failing to cope with academic requirements or poor performance in school, it goes beyond that. Lack of sleep has a significant impact on emotions, especially on teenagers, causing them to react to situations with more emotional responses, worries and stress. Their lack of sleep aggravates their mental state, and from then on, everything goes downhill. 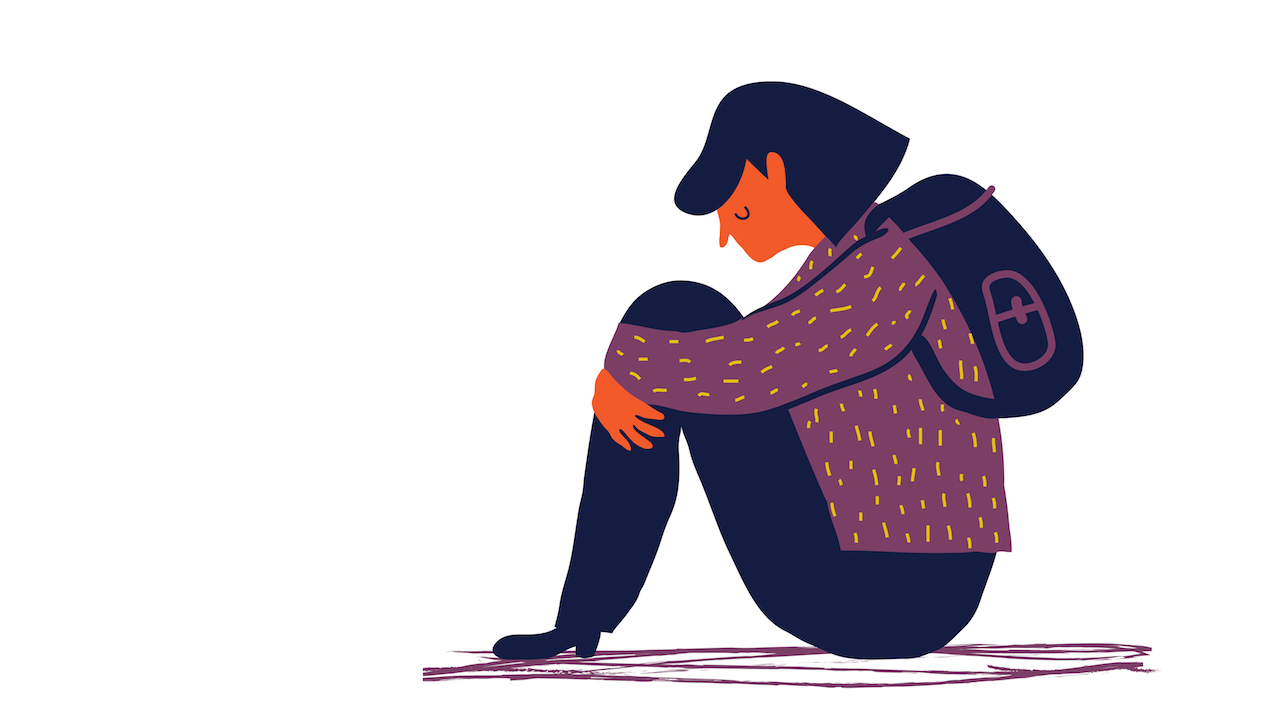 Some teens (or adults) may not wish to change their sleeping habits because they feel familiar but oddly ‘comfortable’ with their habits. This familiarity feels ‘safe’ in a way because there’s less anxiety about expectations. It isn’t a healthy or safe routine to adopt in life, but they don’t know how to change it because it seems almost unachievable with all our responsibilities and it’s too much work to do something about it. Realistically, it’s not something you can completely avoid, both for students at school and adults at work – but when it becomes something you do on a regular basis?  You can’t expect to get out of bed with bloodshot eyes and a decent mood when you have zero motivation to get through the week, let alone do work. It’s no surprise you’ll be more emotionally vulnerable and feel easily stressed/burnt out.

Sleep deficit, inability to concentrate, lack of motivation, irregular mood – all of these play a role in our mental state. They get easily overwhelmed when this unhealthy routine progresses and before we know it our work has piled up so much that even without procrastinating, we can’t ever get a decent amount of sleep because of the ridiculous amount of workload which may lead to periods of burnout or nights of tossing and turning because of stress and anxiety taking over our mental and physical well-being. Realistically speaking, it isn’t easy to change our sleeping habits when we might be prone to negative emotions occasionally, but we still have to force ourselves to carry on and deal with persistent school demands. In most cases, sleep-deprived teenagers get really exhausted easily and crave for sleep, they might have already sacrificed holidays, their hobby, family time, personal time, social life, mental stability, and before they know it, their youth. It feels almost impossible to balance everything all at once.

Sleep deprivation is used as one of the CIA’s enhanced torture techniques for interrogation. Although of course, they were put into inhumane and cruel conditions. They were forced to stand shackled and remain in stress positions from around 40-70 hours. They decided to use sleep deprivation as a torture technique because it had lasting physical, mental and emotional effects. Most teens don’t go as far as 3 or more days without sleep, but nevertheless, it is still an irregular pattern that contradicts the body’s natural need for rest in order to function normally. Even though it’s obviously less intense than CIA’s torture program, general sleep deprivation that exists commonly in teens and adults last for a prolonged period of time. Sleep deprivation is slowly, but surely affecting your body in lots of different ways of harming all three aspects: mood, performance and health risks. Some of those include neurological issues, weakened immunity and mood dysregulation.

There are days when you can’t help it with the amount of workload you have but give yourself a break. Sometimes you have to be a bit selfish, but you don’t have to feel guilty about it. Would you rather go inpatient when you finally reach a breaking point during a burnout? You may feel ‘comfortable’ with being uncomfortable. Wonder why you constantly feel preoccupied with your thoughts in class or get easily stressed/overwhelmed, when you have had 4 hours of sleep every night? Changing the routine that you feel familiar with seems like a lot of work, but sometimes you have to give in a bit of an effort to change things for yourself. This may seem like a really typical advice, but have you ever wondered why people keep promoting these ‘typical advices’ that seem useless and general? Some things start really basic. Physical needs such food, diet, sleep – they all play a major role in your functionality more than you think. Do you expect to see change when you’re stuck in that repetitive, vicious cycle of sleep deprivation and refuse to do anything? Are you perfectly fine with where you are at currently? You are abstaining your body from its natural needs it has learned to function with. What’s wrong with taking care of your wellbeing?

Of course, there are so many more factors affecting teens’ unhealthy sleeping habits that I haven’t considered. Giving seemingly stupid, unsolicited advices to people’s lives definitely isn’t right because everyone deals with different things. Giving advices based on the underlying assumption that people are living life the wrong way, or that people need to change the way they live because people assume that I think I know more about their life than they do – seems like disguised criticism. If you think you function relatively well with the routine that you have adopted, take my advice with a grain of salt. I am a teenager myself, and there’s so much I have yet to learn with my limited knowledge. If that’s what works for you, and that’s how you choose to live your life, that’s completely reasonable. You know yourself best as I am just an observer standing in a general point of view, commenting on these ‘unhealthy habits’ based on statistics. Different situations may mean different things. However, if you think this may apply to you, it won’t hurt to try and change your habits. If you don’t feel ready to make an effort and experience change – take your time. You’re only human.

Newport Academy. 2017. Why Teens Need Sleep More Than Anyone. [ONLINE]

Venkatraman Radhakrishnan. 2017. What sacrifices a medical student needs to do as compared to others in order to become one of the top professionals in the medical field?. [ONLINE]